There’s hardly a grappler alive that doesn’t listen to the Joe Rogan podcast. Rogan is the voice of martial artists in the entertainment business, and especially that of grapplers. After all, he is a 10th planet Jiu-Jitsu black belt by both Eddie Bravo and Jean Jacques Machado. The charismatic UFC commentator is also a big fan of strength and conditioning on top of martial arts. He leads a really healthy lifestyle that includes squeaky clean nutrition and grueling conditioning sessions. And, if there is one tool Joe praises above all others, it is the kettlebell. So, we managed to discover what a Joe Rogan kettlebell workout looks like and we bring it here for you to try!

Conditioning for martial arts was originally nothing more than guesswork. Through the years, and thanks to MMA and high-level grappling, it slowly evolved into real science. However, just like with most elaborate aspects of life, it’s evolution also brought a lot of quasi-science with it. In fact, today there’s so much information on how to train, that you’ll most likely get it wrong. And the more you try to learn, the worse your end result will be. Unless you have the platform to talk to the top people in the industry about very specific aspects of it. Which is exactly what Rogan has. So, a Joe Rogan kettlebell workout means a program that’s based on the teachings of the truly best people for the job.

Kettlebells, for those that do not know, are basically cannonballs with handles attached on top. They come in a large variety of weights and even come in different shapes and sizes. Mr. Rogan, for example, uses ones that are shaped like a gorilla’s head when training. Although today it is accepted that kettlebells are a Russian “invention” there might be evidence that even wrestlers in ancient Greece used these versatile tools. Even if we take it from Russian origin, it still gives kettlebells a good 200+ years advantage compared to other training tools. Kettlebells definitely is the number one choice training tool for grapplers if history is anything to judge by. 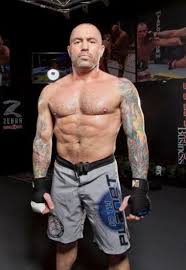 Kettlebells are an inexpensive training tool, that can train multiple athletic qualities at once. Training with them doesn’t require much space and is fairly easy to master. The design is such that the weight is always distributed evenly, even when you train with two kettlebells at once. For Jiu-Jitsu, kettlebells mean you can train both strength, conditioning and power at the same time. Plus, you can get into position and motion patterns very specific to the sport. The Turkish get-up is one such example. Oh, and, to quote Rogan, they “look manly as hell”.

The reason we went for a Joe Rogan Kettlebell workout today is precisely because of Joe’s love for kettlebells. Despite kettlebells now featuring regularly in every gym across the world, no many people know how to use them correctly. Moreover, very few people can actually make grapplers or MMA fighters better just by using kettlebells. Rogan has seen and heard it all, so he is the best filter to reduce all the nonsense and get eh best possible workout routine to make you a real monster!

Joe Rogan’s training philosophy is just as important to understand as the moves in the workout. To keep things uncomplicated, Rogan likes simple, multifunctional moves, that actually make you stronger. In addition, he knows the demands of grappling, especially in terms of conditioning. So, choosing kettlebells is no accidental thing for him. Rogan’s obsession with fitness means that he’s tried everything there is and chose to focus on kettlebells. That right there is reason enough to do the same.

Despite being 51 years of age, Rogan is still going strong. Kettlebells fit his methodology perfectly as they do not put his body under too much undue stress. Rogan likes to keep things very simple and never pushes to failure. He is a follower of Pavel Tsatsuline’s methodology, which leans towards training more often for less time than doing two-hour long sessions. And kettlebells are the best tool to achieve this, while also improving your athletic abilities.

One main thing you’ll notice the Joe Rogan Kettlebell Workout is the low number of repetition. According to Joe, if you can do 10 reps with a certain weight, you should only do 5. that way you’re not going to overtax your body. Remember that you need to train grappling first, and condition yourself second. Pavel likes to use a method called “greasing the groove” that means doing a fairly small volume of work, with moderate intensity, but doing it very often. Joe’s workout is based on this very important principle.

First of all, always start with a thorough warm up. There’s no point in picking up 90 lbs kettlebells if you’re not ready and loose. Next up, despite this being a Joe Rogan kettlebell workout, it is going to feature a chin-up bar as well. You could do the workout with only a couple of kettlebells but including a chin-up bar is better.

Rogan starts with 2 warmup sets of really light weights and 20 reps per exercise. He uses two exercises to get ready for the main circuit later on. The first one is the two arm kettlebell swing and the windmill.

After warming up, Rogan hits his kettlebell circuit which is the main part of the workout. He repeats the circuit 3-5 times, with 2 minute rests between each take. Here’s the circuit:

Finally, Joe hits a couple of sets of some bodyweight work. This includes 2 sets of chin-ups and bench dips. If you want to take it up a notch, do parallel bar dips instead. Make sure you do them as straight sets and go for as many as you can hit in 30 seconds. Rest 2 minutes in between once again.

Finally note that Joe does this workout himself, and well, have you seen him? He is jacked!

Defending Yourself Against a Killer Clown With BJJ Seems Easy