Apart from Sambo, due to its grappling roots and connection to Brazilian Jiu-Jitsu, and a very vague idea of what Systema is, how much do you know about Russian martial arts? AS big as it is, Russia has uncharacteristically few martial arts. At least as far online research shows. If anyone has anything to add, please do so in the comments. So far, even though it doesn’t possess dozens of martial art styles, Russia does have everything, from grappling to striking and even mixed martial arts styles. And some of them are much older and much more diverse than you might think.

WE’ve talked about interesting and unusual martial arts from around the world before. Examples include African martial arts, as well as Brazilian martial arts that stretch past Jiu-Jitsu. There are a lot more martial arts out there, some of which are highly entertaining. When it comes to Russian martial arts, the one thing that’s immediately noticeable is that their martial arts are all still very much actively practiced across the country. Of course, some are more famous than others, but they do not have a martial arts style that’s completely forgotten or only practiced in a small isolated area of Russia. That said, let’s look at some of the most interesting martial arts in existence.

The Fighting Styles Of The World’s Largest Country

Basically, Russian martial arts really kicked off after the fall and breakup of the Soviet Union. Up to that point, they were not particularly encouraged and were even outlawed for a while by the Russian empire in the mid-1800s. During the Soviet era, the focus was on hand to hand martial arts that had a military application. A couple of those styles are still in large, both in Russia and the world now, and have morphed into sports, as well as hand-to-hand systems. Given the size and location of Russia, there are many people that belong to many cultures living there. That has been the case for centuries.

Apart from demographic diversity, this also means diversity when it comes to martial arts as well. Throw in all the war and conflict Russia has seen, and you have a perfect recipe for the development of martial arts. Most of them follow the pattern of other ancient martial arts – they’re first developed for battle and then turn into sports.

Russian martial arts got their day under the sun somewhere in the 1980s. After the Soviet Union, apart from the well known Systema and Sambo, a few other martial arts styles emerged. With roots in folk-type martial arts, they brought something slightly different to the world of martial arts. A couple worth mentioning is Buza and Russian All-Round-Fighting. Let’s look at each in more depth.

Russian martial arts, at least those that I could find, number 8 different styles. Again, given the ethnic and geographic diversity of Russia, there are bound to be more, especially folk style ones. However, the ones that are not a local secret tradition include the well-known Sambo and Systema, to begin with. Of course, there are more specific ones too, like SKad, and Russian Fist Fighting. There are also folk-type martial arts in Buza and Russian All-Round-Fighting, as well as hand-to-hand styles like ARB. 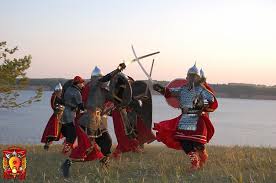 This one is a real traditional Russian martial art. In essence, it is knight-fighting, although it is nothing like ancient Templar battles you might be thinking of. We probably would not know much of this Cossack based saber-fighting art, if it wasn’t for M-1 promotions. In their regular MMA events, they know throw in sword fighting to honor Russian All-Round-Fighting. It is fun watching at tho knights battle out a sword fight int eh middle of a ring that usually houses MMA fighters. The sabers are now blunt, fo course, but this wasn’t always the case. 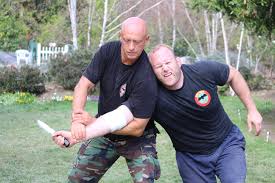 Arguably, the most famous of all Russian Martial Arts, at least in modern days. With the rise of styles like Krav Maga and of course, MMA, Systema not only gained popularity but managed to spread worldwide. Systema is a combat-oriented style that involves everything, from unarmed combat to knife fighting and gun defense concepts. It is a grappling based martial art more than it is striking one. It is mostly down to leverage and distance control to get control and finish an opponent quickly. Practiced by the Russian special forces, Systema also has a civilian version, although it is not a sports-type martial art.

The name, as you might presume, means simply “system”. It is a martial art that the world first met somewhere in the 1990s. In the post-  Soviet Union era Systema spread quickly amidst some controversy, though. Namely, it stakes a claim that is emerged as a result of “secret” fighting techniques of the Soviet Union’s special forces. The civilian version today is all about hand to hand combat geared towards self-defense. There’s no actual knife fighting done, but there is lots of knife and gun defense training in the system. 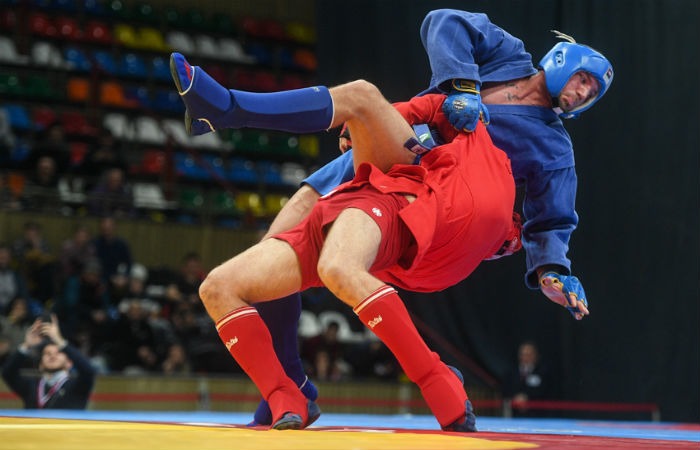 d the most effective aspects of all other martial arts. Two different people actually developed the art independently, one working on the catch-wrestling aspects of it, while the other on the softer aspects of martial arts. Their styles later merged to form what we know as Sambo today.

There are two main forms of Sambo today; Sport Sambo and Combat Sambo. Both work as sports and both have competitions around the world, including world championships. Sport sambo involves mostly Judo-type matches, just with lots more submissions, particularly leg locks. Chokes, for some reason, are illegal techniques. Combat Sambo is like MMA, including strikes and grappling, both standing and on the ground.

The Sambo attire is also very recognizable with one fighter being in blue and the other In red. Furthermore, they wear a top Gi jacket, but shorts on the bottom, as well as wrestling shoes of matching color.

This is the Filipino Escrima od Russian martial arts. Okay, not quite but it does involve sticks. The sticks in question can be anywhere between 1 and 4 feet long, and the fighters do not use any protective gear whatsoever. In addition, to stick fighting, Skad also involves chokes, locks and other grappling techniques if the fight gets to the ground. This is a new art and is still in its development phases.

In essence, this is just Russian bare-knuckle boxing. There’s information about this art as far back as the 13th century, but it is bound to be older. It is connected to a celebration ceremony, one dedicated to Perun, a Slavic god. IN contrast, those that spread Christianity tried to outlaw it, by saying there is no space for those that engage in fist fighting. Needless, to say, this didn’t take with the Russians. 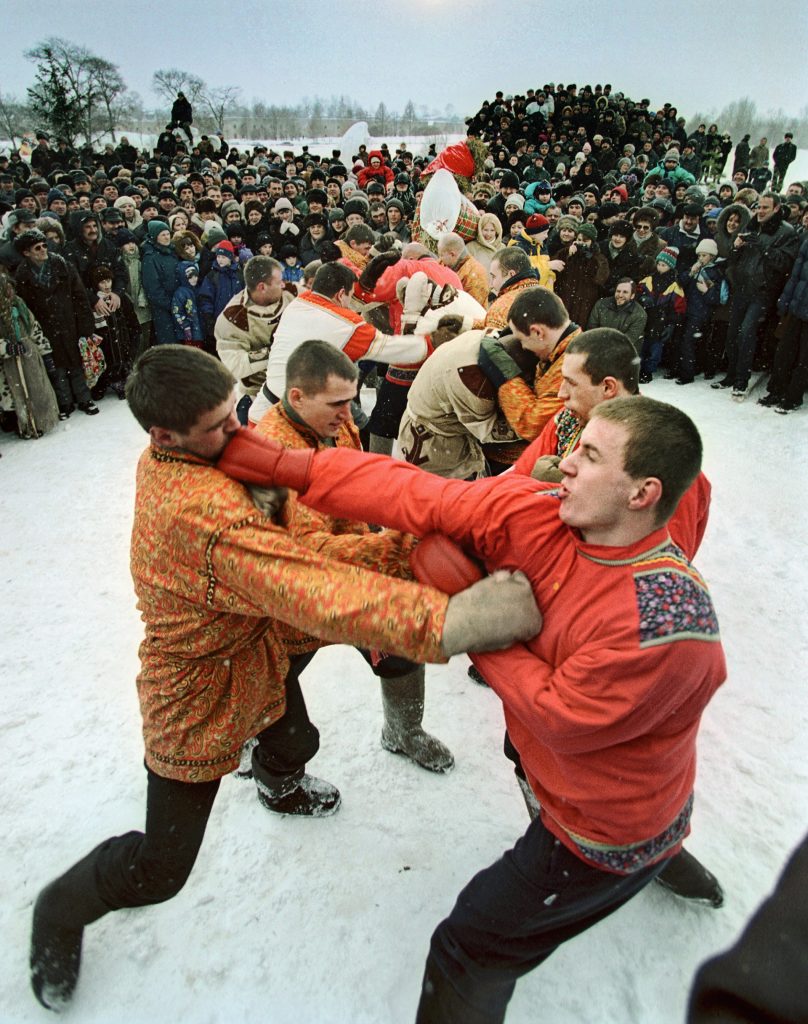 Most fights took place during holidays in makeshift “rings” made out of the crowd. Traditionally even young kids fought, with matches involving older and older fighters until they got to the adult fighters. The popularity of the sport rose and fell with different Emperors and rulers of Russia. In popular culture, during the 19th Century, Russian fist fighting was mostly dead, only depicted in theater plays and operas.

Rules were different depending on the region. In some places, it was bare-knuckle, while in others, they wore stretched out sleeves over the fists. Apart from the usual one vs. one fight, there was also a team vs. team fight called “wall on wallЌ. In the one on one fights, there was an option to fight similarly to today’s boxing, as well as one where fighterс took turns hitting each other. In the team version, it was more f a massive brawl with people numbering from a dozen to over a hundred per team participating. The goal was to force the “walls” of people back and out of the predetermined area.

ARB is a Systema-like martial art, geared towards practical self-defense. It is an abbreviation of “Armeyskiy Rukopashniy Boy” or “Unarmed Hand Fighting. It was a military-style originating in 1979. Basically, ARB is a mixture of techniques and concepts for various different martial arts in the world. Competition-wise, there’s an annual championship that thе Airborne troops of the military hold, which is actually how it all started. Rules are distinctive, involving the option to finish an opponent that’s on their hands and feet while you’re still standing. In other words, it is pretty much NHB, with the option for a tap or verbal surrender, of course.

In a more modern sports sense, ARB fighters wear taekwondo-type protection, with body armor, helmets, gloves, and shin pads. The fighters compete in rings, with referees, weight, age and belt divisions included. There are lots of forbidden techniques that make it safer to train and compete in as a civilian sport.

Yet another hand-to-hand martial art.  It is a folkloric fight, though, and expressed as a dance battle, something along the lines of Brazilian Capoeira. This is one of the more interesting representatives of Russian martial arts, that involves people standing in a circle with two fighters in the middle. They wear traditional Russian costumes and there’s traditional music playing as well (again, like Capoeira). At times, there’s even the use of traditional weapons in the dance/fight performances.

Buza originates in Northwest Russia, where it has been developing over many centuries. It is still a big thing in village celebrations in the region. The fighters combine movements of spinning, sweeping and kicks during the “matches”.

Finally, a notable mention of Russian wrestling. It is not like wrestling is a Russian specific sport, but it is one that was developed in specific directions in Russia throughout centuries of work .tremember a certain UFC champ called Khabib Nurmagomedov and all fo the other Russian wrestlers no dominating the world MMA scene? Well, that wrestling has been a part of Russian culture for ages.

Historically speaking, wrestling is a big part of Russian culture, Russian folklore and mythology, and even the Russian military. IN celebrations wresting was often took a central role, with the winner claiming special privileges among the others in the village. Plus it was the preferred choice of entertainment for decades. Later on, Russian wrestlers became legendary on a world and Olympic level as well, starting from Alexander Karelin all the way to Khabib Nurmagomedov.

As with other things, Russian is full of surprises when it comes to Rusian martial arts. Hand-to-hand combat and Sambo aside, who would’ve thought Russia had a martial art that involved dancing and kicks like Capoeira? Or, a weird fighting system involving sticks, or even more bizarrely, a bare-knuckle boxing event where teams of hundreds of people clashed? Thre’s a lot of entertainment coming from there, for sure, and I can’t wait to see what else will be revealed about this intriguing country.

Picking Fight With a Trained Fighter is Never a Good Idea.